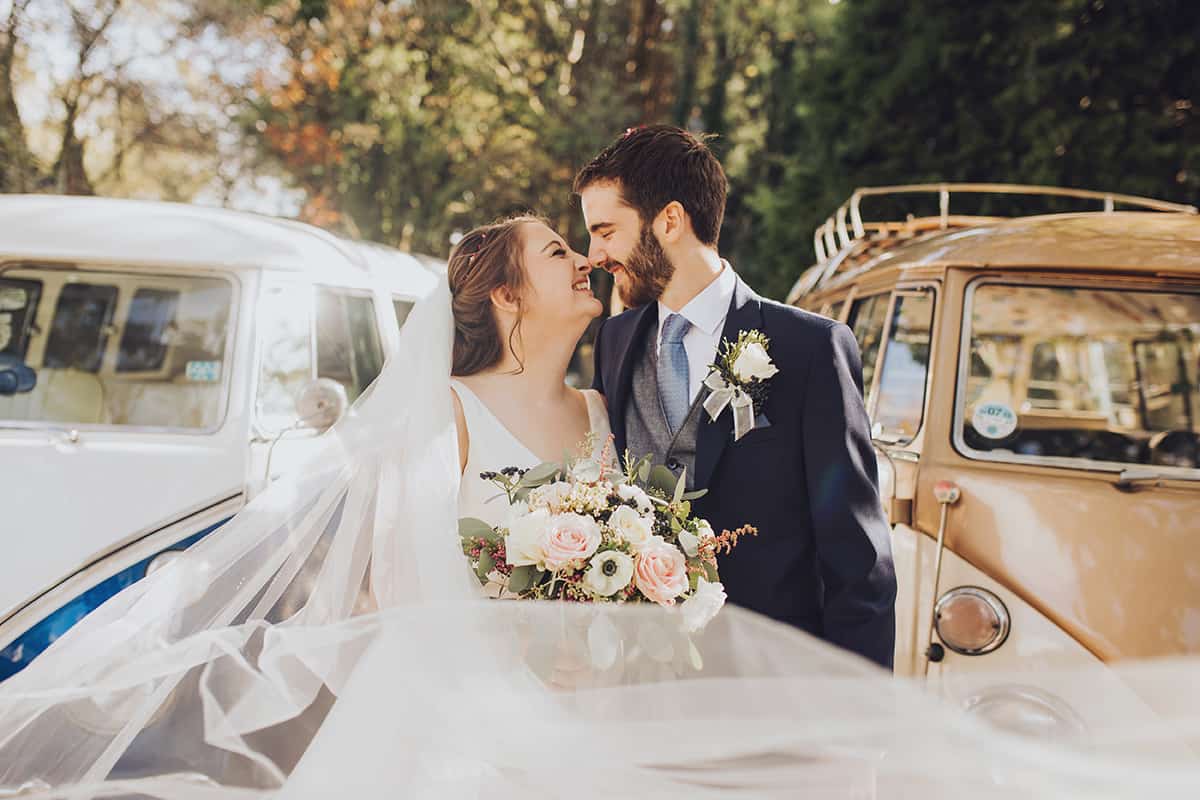 Rhian and Chris had the most beautiful day at their autumn Pencoed House wedding. They met each other in University and have been inseparable ever since.

We met at university in Aberystwyth when our housemates decided to go walking up a hill by the sea at midnight in fresher’s week. We didn’t know each other going up, but came down together chatting about comedy. We saw each other here and there throughout uni through mutual friends, but only properly got to know each other in third year.

I had the best time at their Southerndown Beach engagement session and I knew their wedding was going to be amazing after hearing about all their plans.

We were back in Aberystwyth and Chris had suggested earlier in the week that we go back up the hill where we met. He wanted to be there to capture the sunset but unfortunately Storm Callum was in town! Luckily, I like a good bit of rain so we still went up, and when he thought he’d found the exact spot where we met, Chris got down on one knee (nearly getting blown over in the process), got a ring box out of his pocket and said: ‘Last time we came up here, we didn’t know each other, but now I know I want to spend the rest of my life with you.’

Rhian got ready at her parents house with her three bridesmaids. They all had their hair and make-up done by the talented girls at Planet Glam. They had two VW Campers come and collect them to take them to their autumn Pencoed House wedding.

Chris got ready with his groomsmen and drove himself in the Maserati Ghibli he had hired especially for the wedding!

Before the ceremony they had various games for the guests to play, such as guess the first dance song and draw what you think Rhian’s dress will look like!

The ceremony room at Pencoed House is beautiful and they’d decorated it with a willow arch and petals on the floor. Rhian and Chris tied the knot in front of their closest family and friends. They walked out under a shower of real petal confetti, thrown from cones made out of pages from their favourite books.

A guitarist played in the gardens at this sunny autumn Pencoed House wedding as the guests enjoyed drinks and canapés.

The evening brought hilarious speeches, a packed dance floor and fun with sparklers outside too!

Thank you so much for having me to your autumn Pencoed House wedding!

What is your first dance song?

First dance will be to Unforgettable by Nat King Cole. The lyrics have a lovely meaning but we mostly chose it because of an inside joke! It’s based around Chris’s impression of Cole’s very deep voice (works best with bathroom acoustics, haha).

Bridesmaids: Maya by Next